Good data visualization skills are becoming vital in many fields. Data visualization helps you communicate your point visually, clearly and quickly. This is especially effective when communicating with people who are short on time and unable or unwilling to read reports with tables of numbers. Whether that be higher management or casual blog readers, presenting data visually speeds your communication a hundred fold.

Learning these basic data visualization skills will have a great impact on your career, your blog, your work, and the success of your project.

This guidebook will attempt to teach these basics skills to you. We hope you enjoy it.

Let’s go over some common terminology, and define key concepts:

-Variable is any characteristic, number, or quantity that can be measured or counted.
Age, sex, income, expenses, country of birth, capital expenditure, class grades, eye colour and vehicle type are all examples of variables.
-Data Series is a row or column of numbers that are graphed in a chart. You can graph one or more data series in a chart. These data series can exist as rows or columns in a table. It depends on how the table is set up. 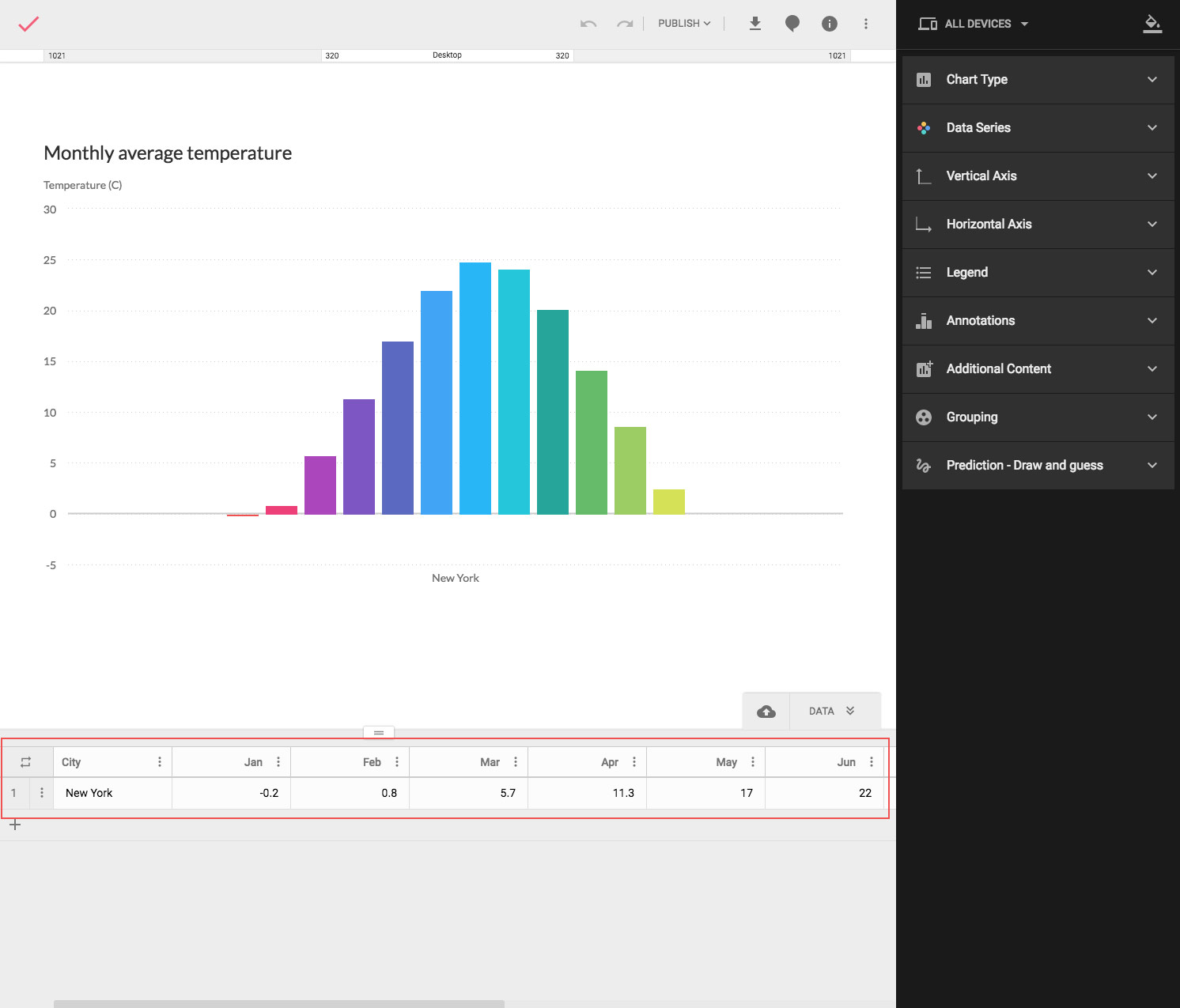 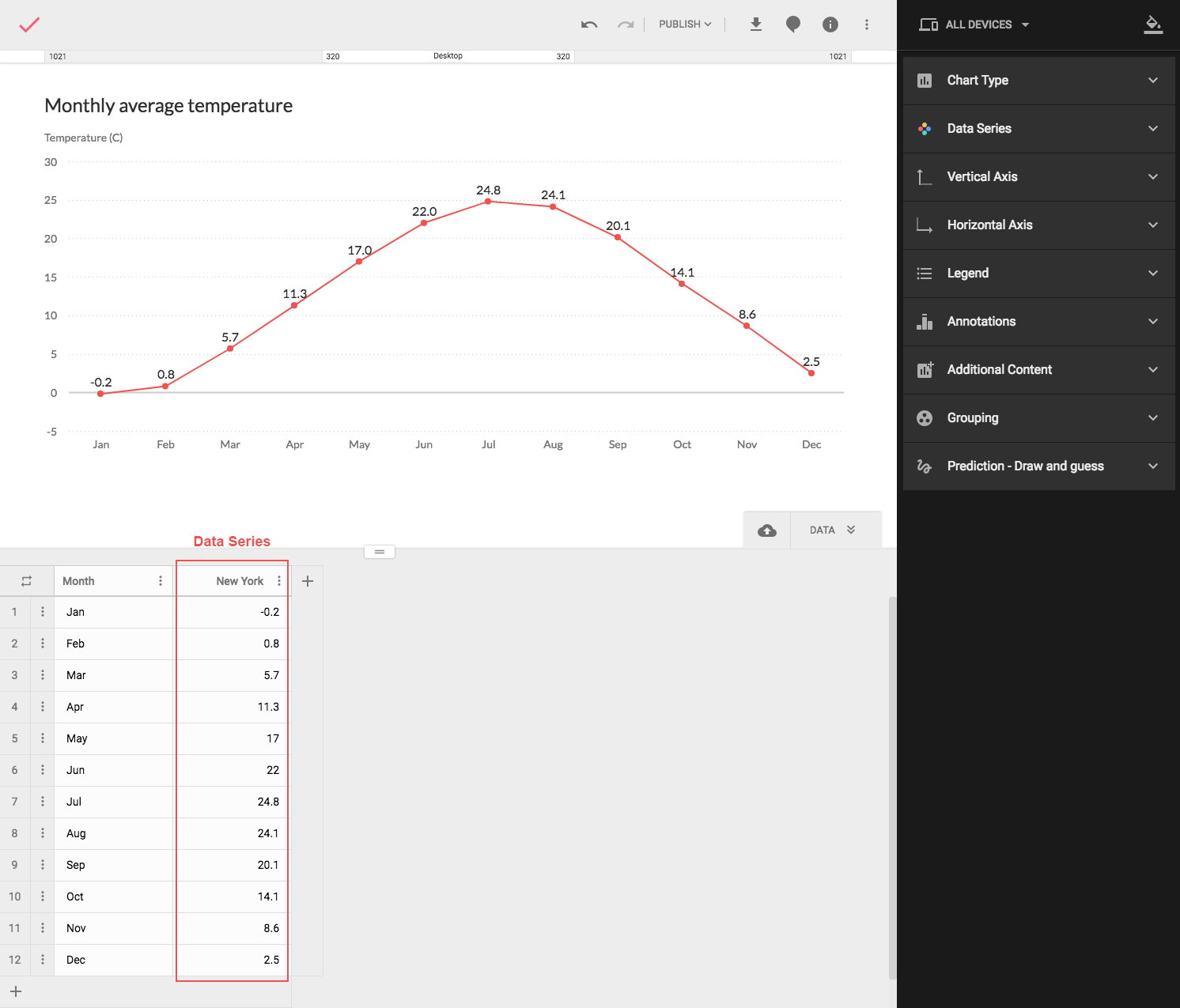 As you can see in example chart every data point from series has a corresponding point in a chart.

In case of dataset with more than one series each series is graphed independently.
Example: Average Monthly Temperature for New York, Tokyo and Berlin 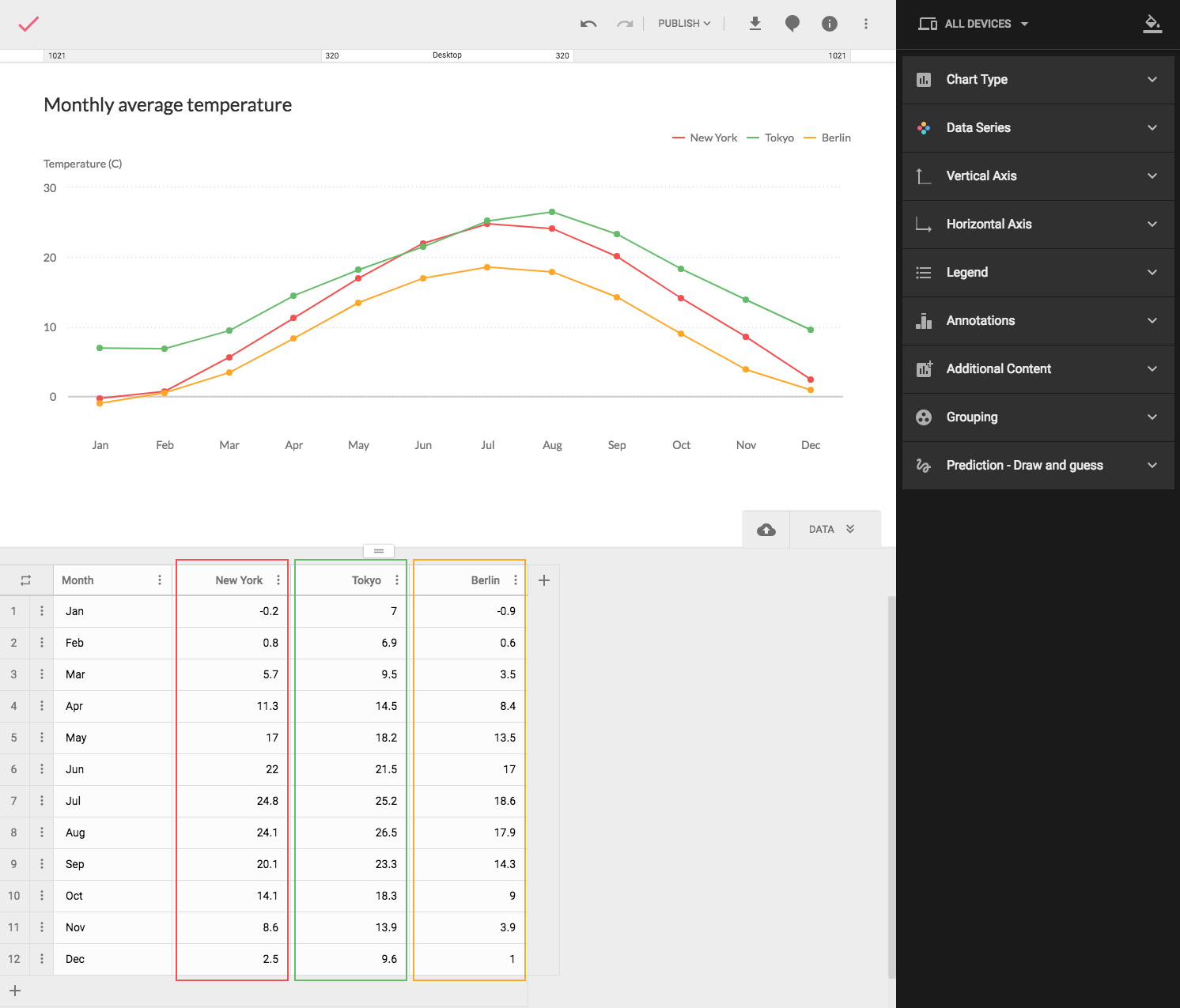 Key series is series that forms the backbone of your dataset, if you remove it, your data doesn’t make any sense. All other series in dataset relate to key series. (its column is often marked as an ID column with unique values, or it can be a time series).
It is a convention that key series is first column of your dataset.
This series is never used as series on the chart. 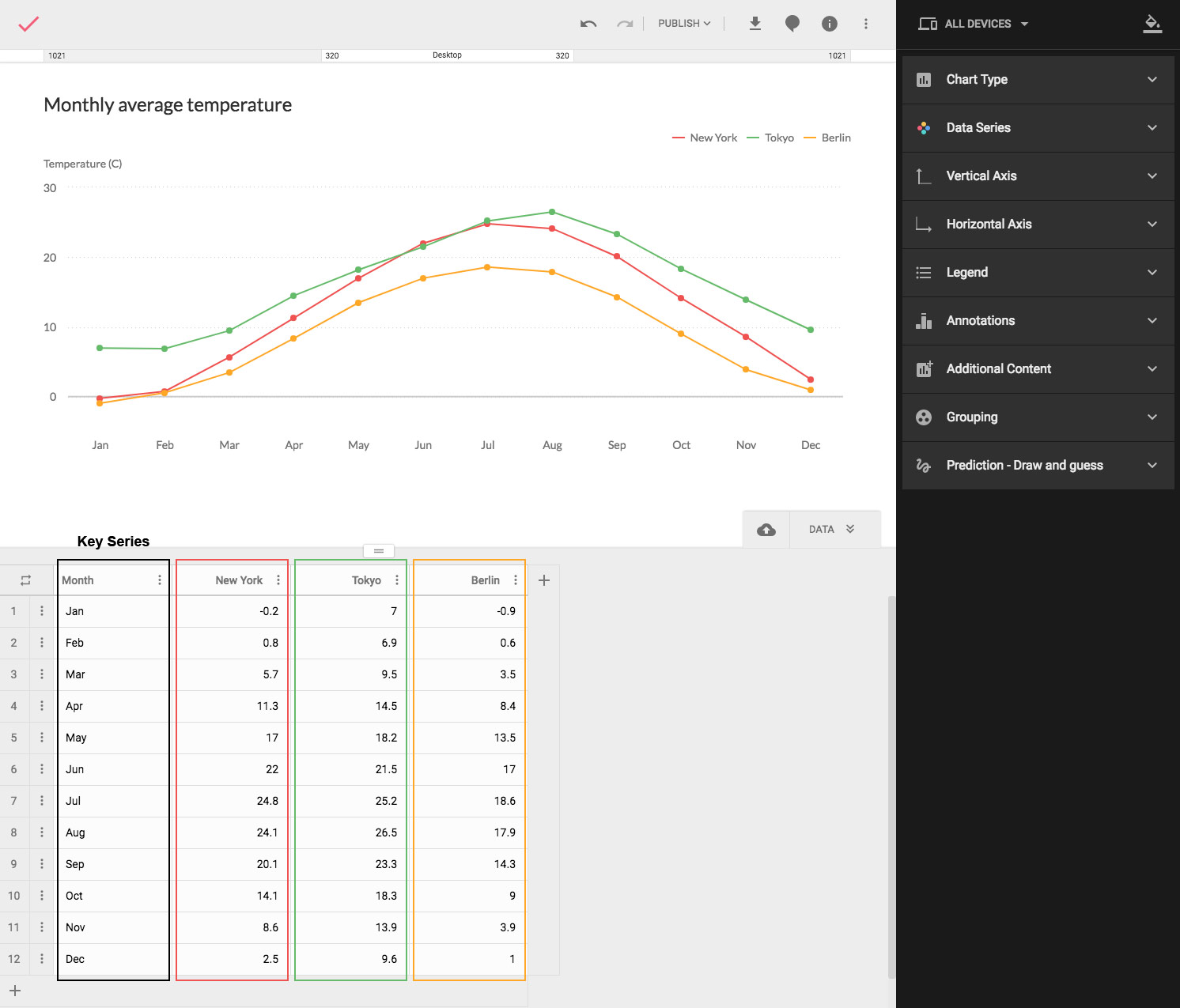 Getting to know your data

Perspective and context play an important role in how your data is perceived.

Let's take a look at the example data of children not enrolled in school worldwide.

According to World Bank, in 2011, almost 32 million girls were out of school (compared to 30 million
boys). In context of gender equality this data is perceived as negative.

But when we add time perspective and compare the numbers through years, we find out that the number of girls out of school has never been lower and that the gender gap has never been smaller, and this finding is perceived as positive.

Notice how the same data can be perceived differently when we change our point of view.

This is why it is important to have a clear idea of what message you want to communicate before collecting and visualizing data. After you figure that out, you can start browsing for data.

The right visualization: a step by step approach

The idea is to simplify the process of decision making to only a few steps:

What type of dataset do you have?

First step is to analyze your dataset and determine its type.
Every dataset needs to have a key series and it is important to identify it correctly.

Point-in-time datasets contain data about an occurrence at specific point in time, for example GDP of countries in Europe, where key series would be country name.

To illustrate how to identify the key series we provided the example dataset Health Expenditure and GDP Per Capita.

There are three series in this dataset: Country, Health expenditure per capita ($) and GDP per capita. Since all three series have unique values, key series is the one which all other series relate to. In this case Country is the key series because other two series contain data linked to Country column values and not the other way around.

Once you identified the key series, the next step is to see if it is also a time series or not.
In our case, key series Country is not a time series, meaning our example dataset is point-in-time.

Presentation type directly affects the message you are communicating.

Composition type shows how a part compares to the whole and how a total value of a series can be divided into shares.

Comparison type is used to compare the values between one or more series with aim to find the lowest/highest values or different trends. 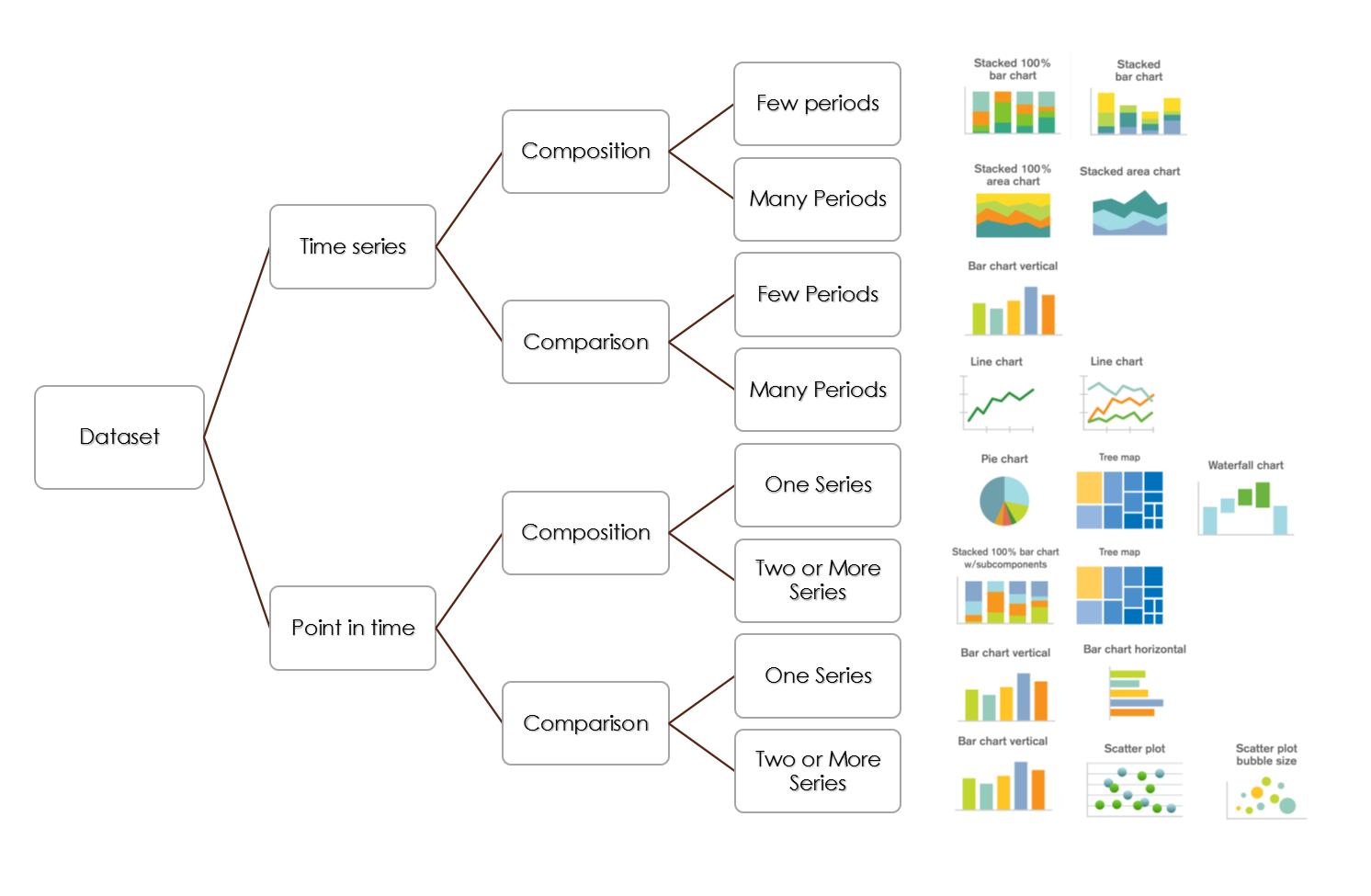 There are several types of visualizations that can be used for each dataset type, depending on the presentation type you choose.

Datasets presenting composition of 1 series containing under 5 categories (data points).
The most common type of visualization for a simple share of total is a pie chart.
This visualization type is the easiest way to visualize composition but its design makes it hard to notice small differences in values.

Example: How many siblings do students of one class have, in percents (1 Series, 3 categories) 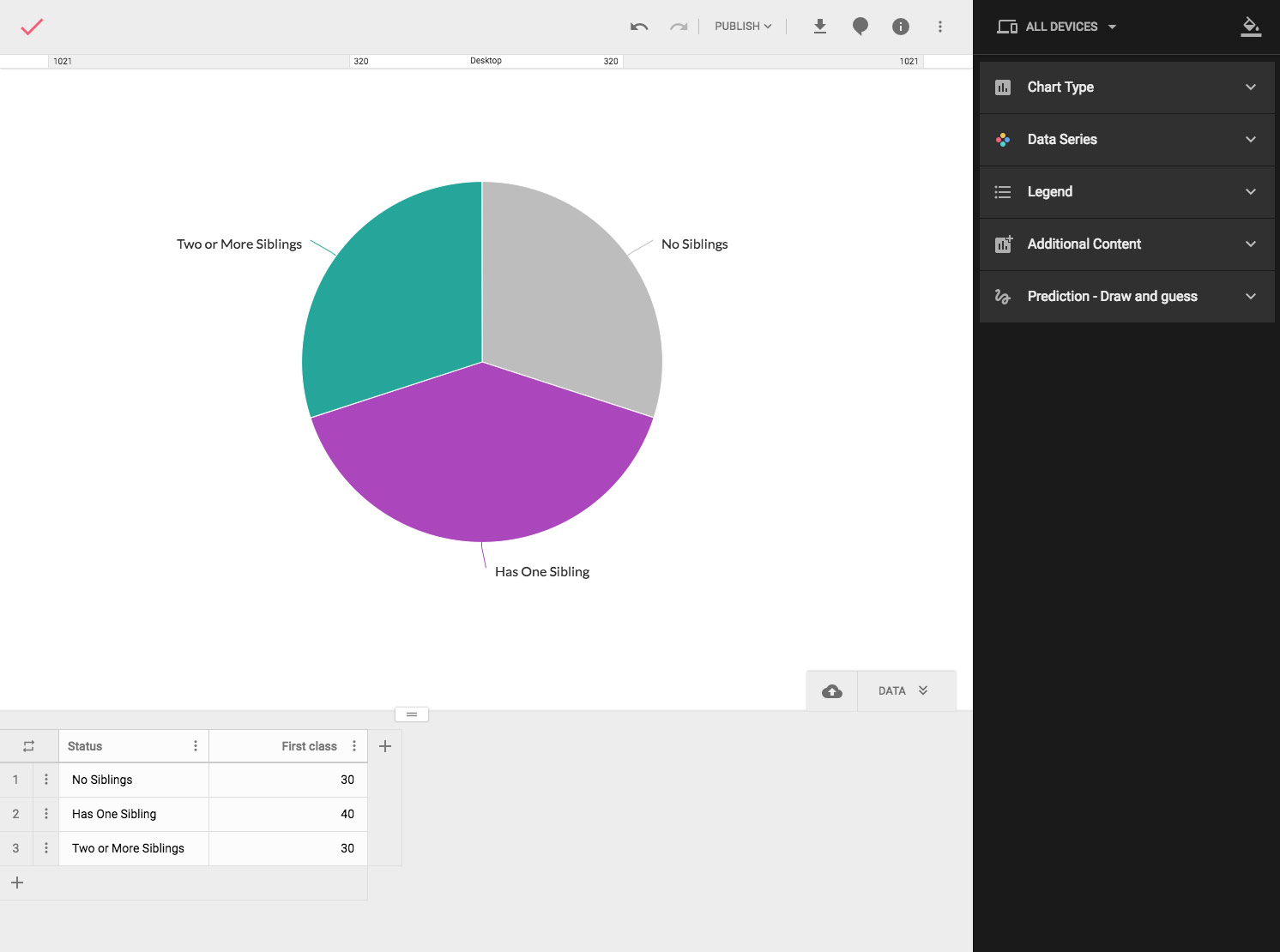 -Data presented by pie chart always has to add up to 100%.
-You should use it for a maximum of  5 categories if you want to keep your chart neat and easy to read. (if you have more than 5 categories consider using column/bar chart)
-Slices should be ordered from largest to smallest value to make it easier to read
-Don’t use multiple pie charts for comparison

Composition of 1 series with 5 or more categories

Pie charts containing 5 or more  categories may appear overcrowded and hard to read, so in this case stacked bar or column chart is a better option.

Example: Let’s get back to our class from previous example and assume we have a more detailed breakdown of categories by number of siblings. (1 Series, 5 categories) 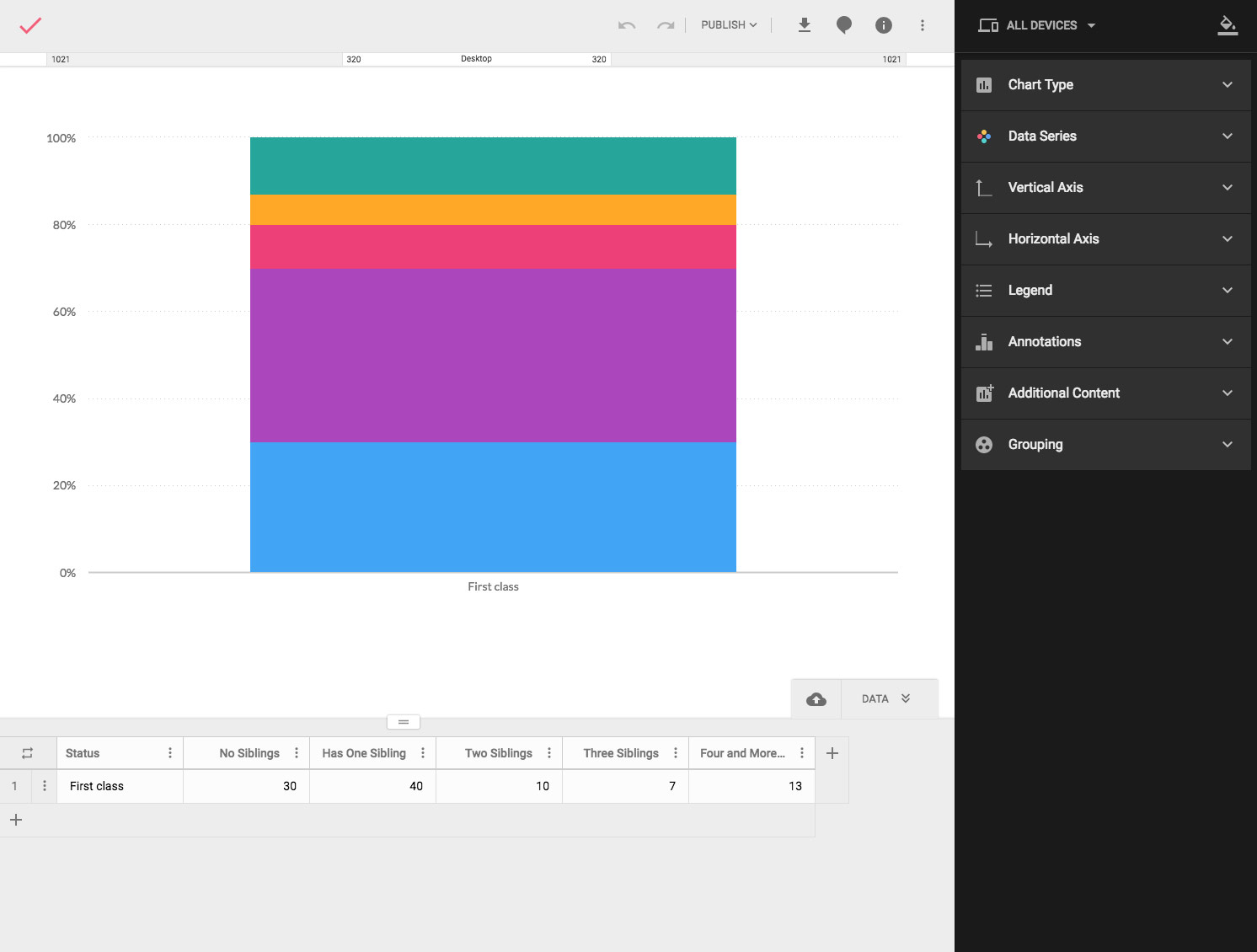 If you want to represent share of total of multiple series, instead of making multiple pie charts you should use a column/bar stacked chart.

Each column/bar should present one whole (series), thus it has to add up to 100%. This type of chart allows you to present parts of a whole that would usually be visualized independently.
Example: Our previous datasets contained data only about one class (series), we can extend it by adding data about two additional classes to create dataset with multiple series.
(3 Series, 5 categories) 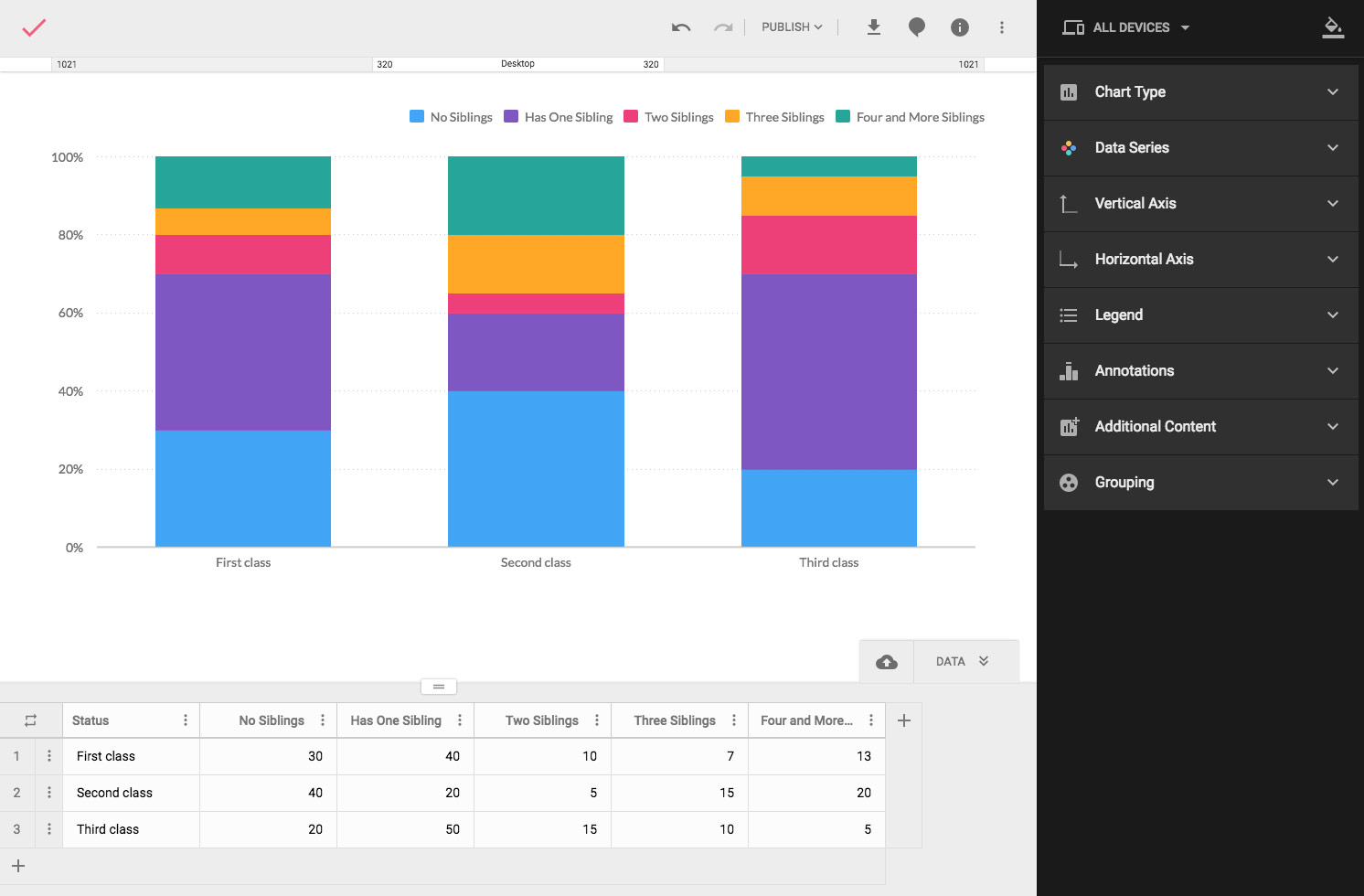 Most common visualization used to compare values across one series is column/bar chart. Unlike in composition, values in one series don’t have to make a whole.
Example: Television ownership across countries  (1 Series, 4 categories) 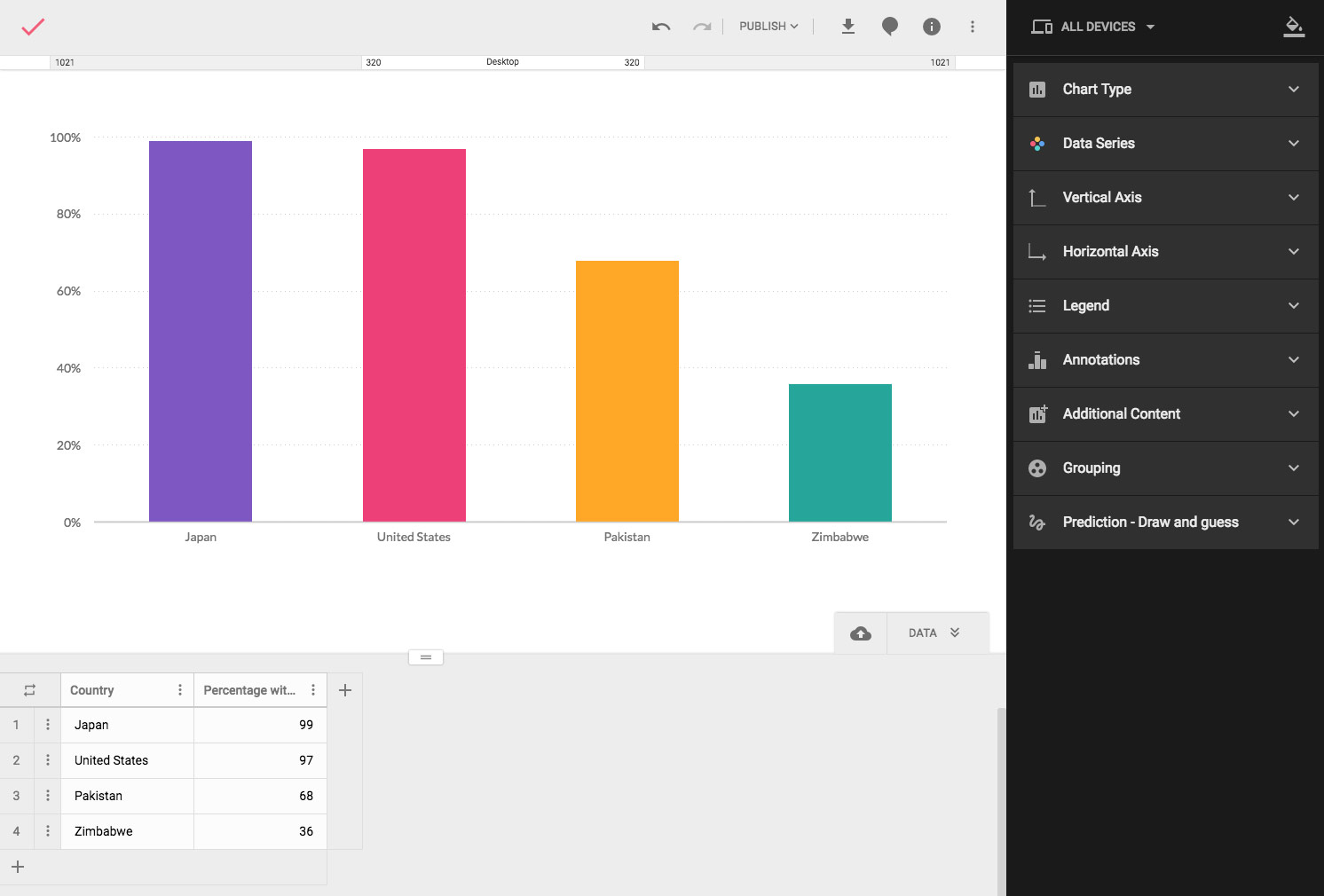 -Suitable to represent many categories
-Easier to represent the difference between values (you can use value labels for showing the exact value of each column/bar).

Scatter plots show how one series affects another, meaning you can visualize relationships and trends in the data.
Each point is plotted based on the values of each axis, series values act like x-y coordinates.
They are the best option for large datasets.
Example: Dataset containing life expectancy and gdp of world countries. (2 Series, 10 categories) 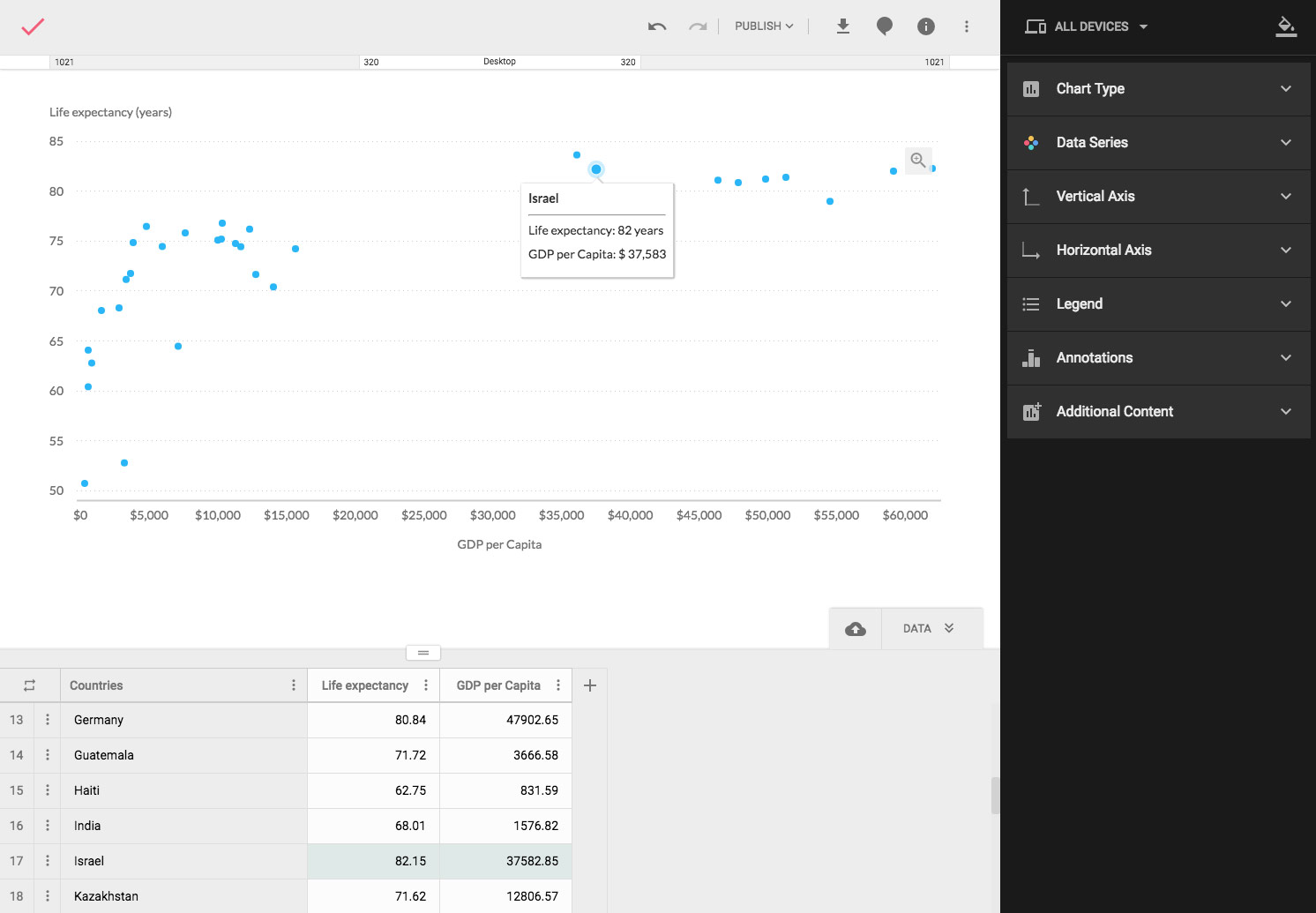 Similar to scatter plots, bubble chart is used to compare three series, where the third series can be visualized by the size of the bubble.

What type of chart will be used for composition type will depend on the time series from your dataset and how many time periods it has.

If there are few time periods (5 or fewer), the best option would be to use a column/bar stacked chart.
Example:  Change in composition of PAC Contributions over a period of years. (2 Series, 5 categories) 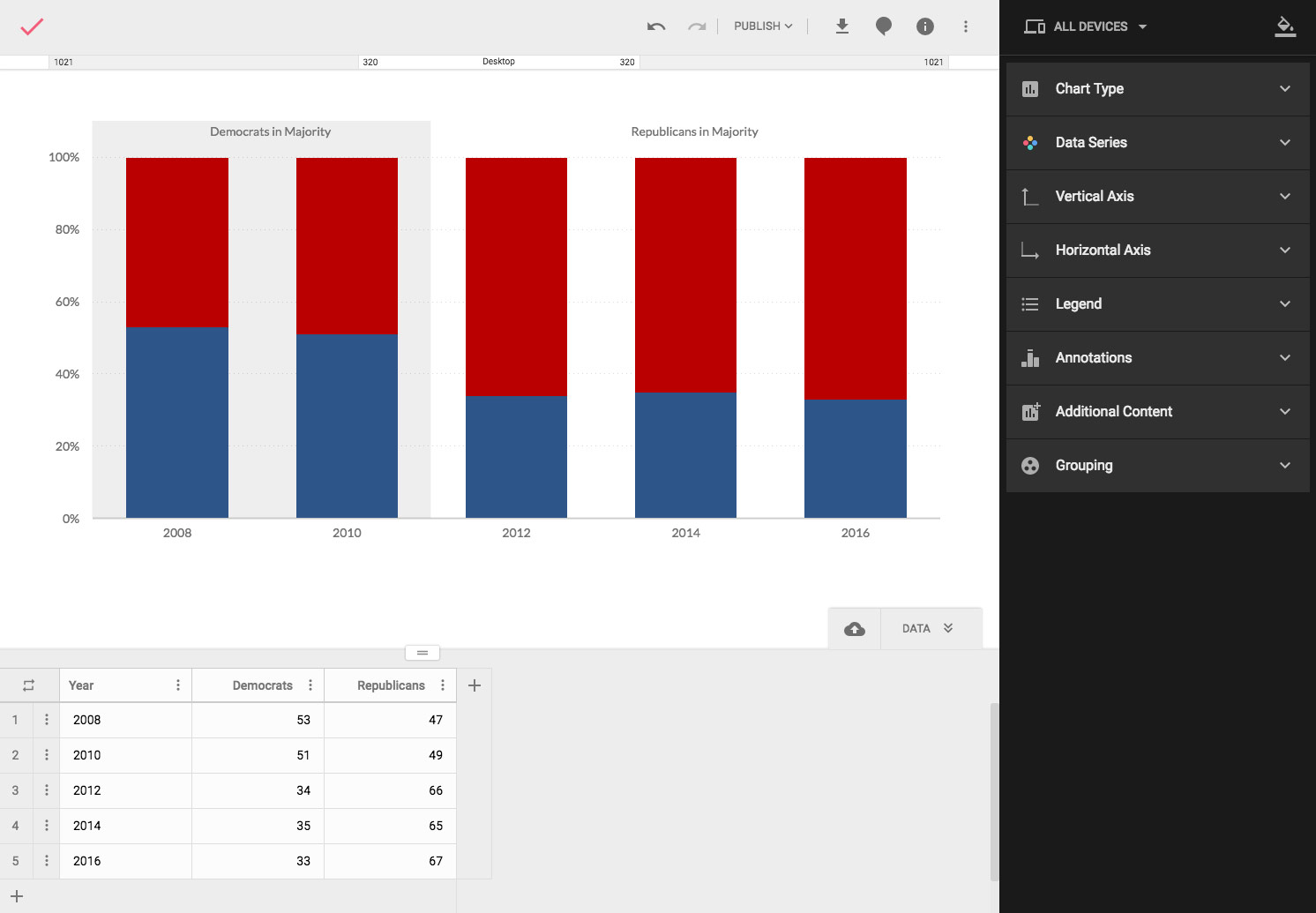 If you have a time series with more than 5 time periods, the best option would be to use area chart.
Example: The change in composition of Federal expenditures for many time periods (4 Series, 10+ time points – categories) 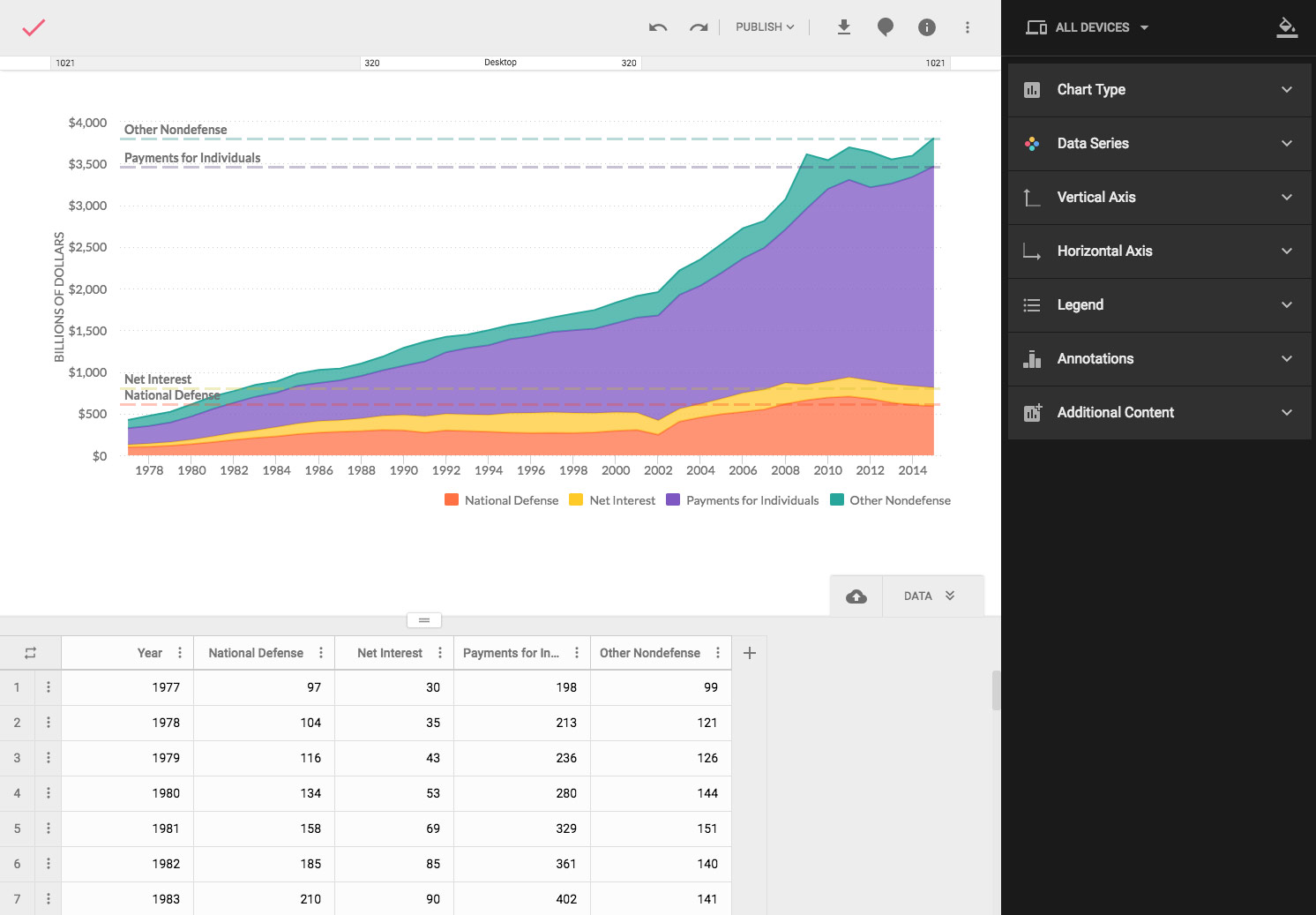 Visualization type for comparison also depends on the time series from your dataset and how many time periods it has.

If there are few time periods (5 or fewer), the best option would be to use a column bar chart.
Example: Political polarization in the American public in 1994 and 2016. (2 Series, 2 time points – categories) 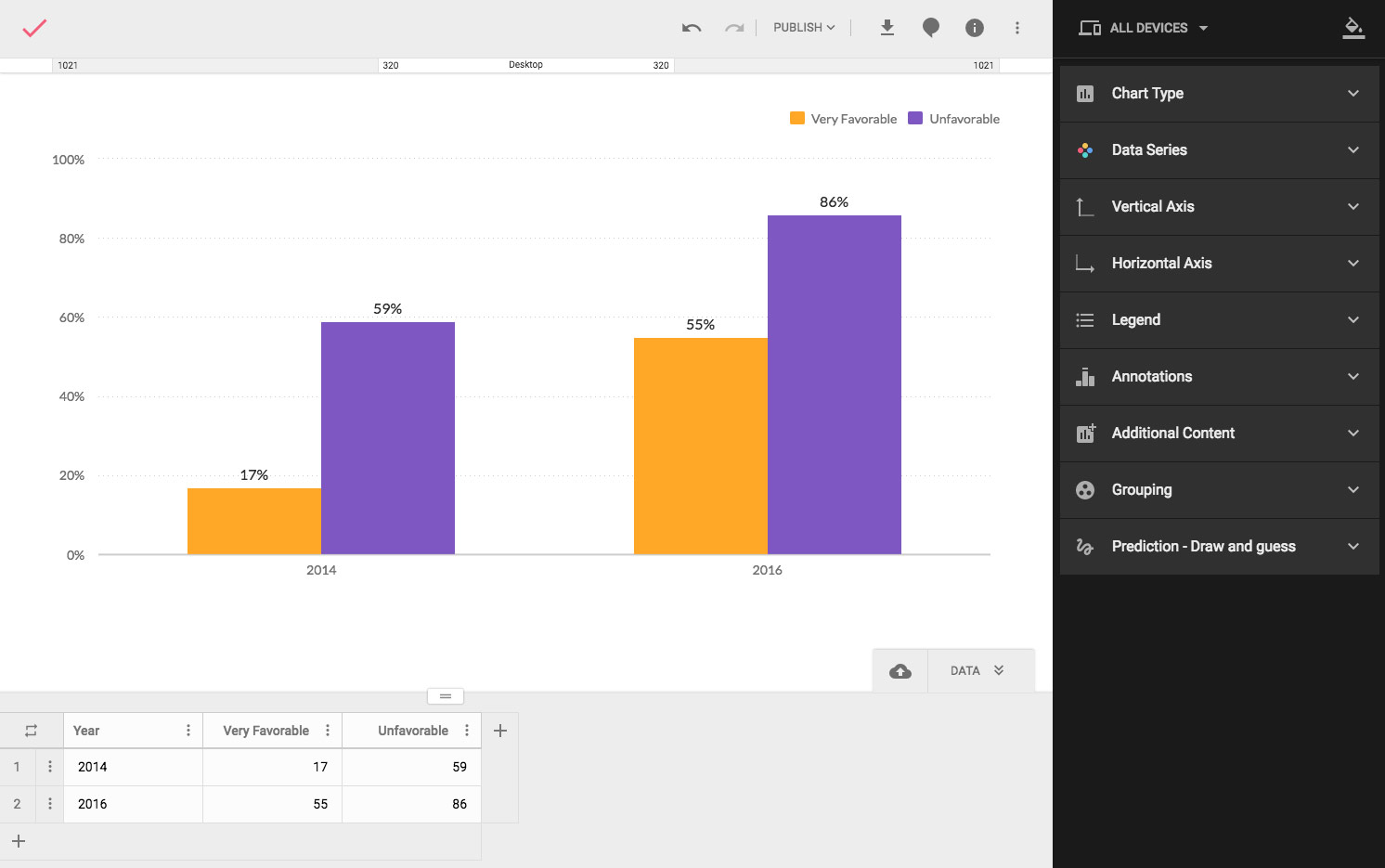 For comparing values over many time periods (five or more) use line chart.
Example:  Changes in life expectancy from 1900 to 2011 (2 Series, 10+ time points – categories) 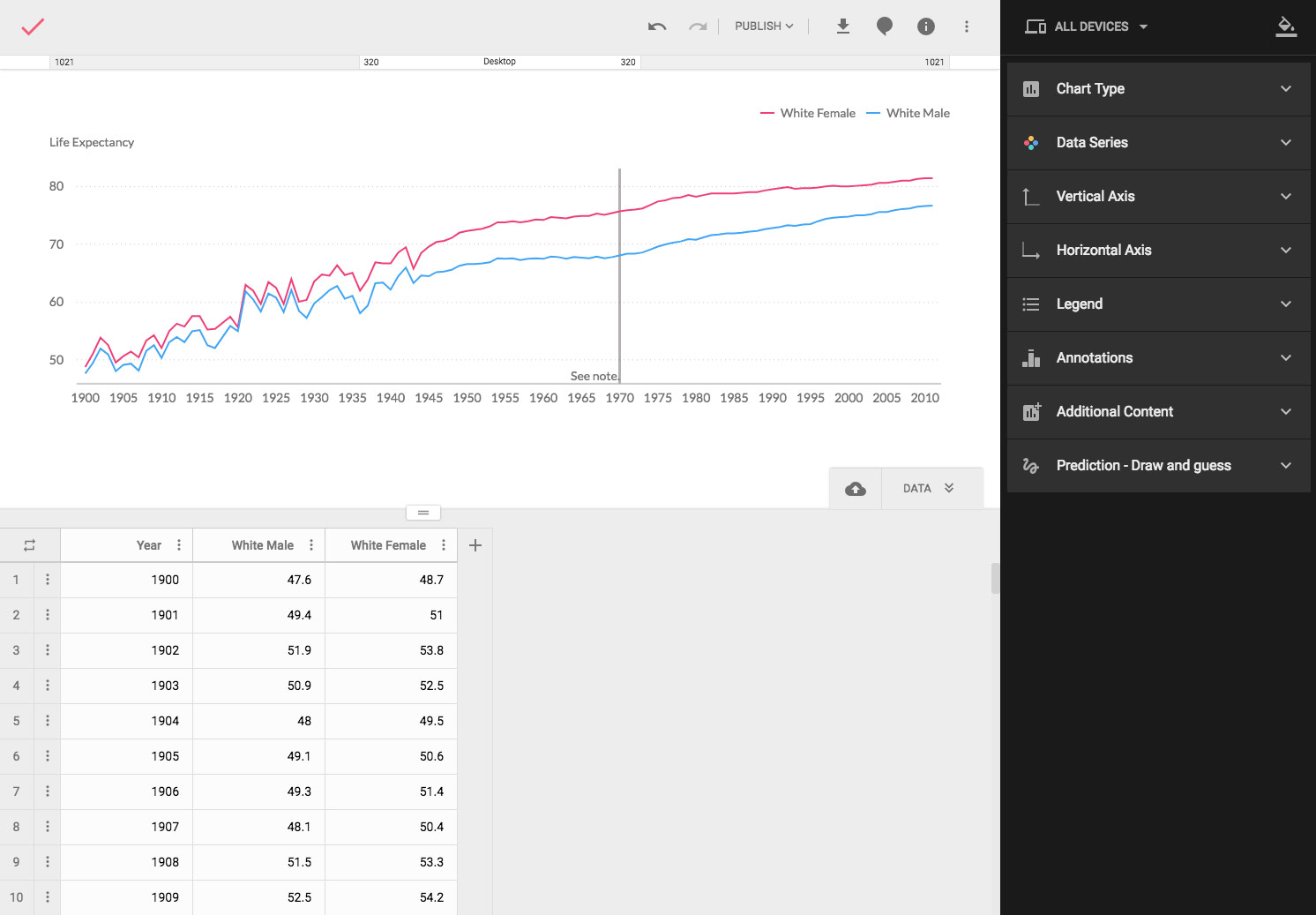